Last Saturday an Ennis Track U17 relay team consisting of Tony Odobote, Shawn Benson, Farouk Sobayo and the star of the team Gabriel Kehinde, won the National 4×100 relay, and also set a new National record of 44.55 seconds in the process. Gabriel Kehinde pulled off a double by winning the boys U16 100m B National Final in a new record of 11.45, beating the old record by over half a second. Daniel Ohiki, also won in the boys u15 100m final, in a very good time of 12.35.

On Sunday at the GloHealth National Juvenile Track & Field Championships Day 1. Ennis Track athlete Ava Rochford won silver in U12 Turbo Javelin with a throw of 22.80m and a Bronze medal in the u12 High Jump.

Ailbhe Doherty had a titanic struggle with Aimee Hayde of Newport A.C before finally winning the gold medal in 2.19:13 in the u14 girls 800m.

Ellie Pike put in strong performance and finished in 7th place.    Mark Hanrahan finished just out of the medals in 4 th place   in the U14 Boys 800m. Ben Deasy finished in the top 6 in the boys u 16 800m

Chismon Ugwuera was also 4 th in the U15 80m hurdles at the National finals, but has the Long jump on day two of the National Championships to look forward to .   Other athletes that took part on Sunday included Shanice Benson in the Discus and Aisling Maloney in u 12 turbo javelin. 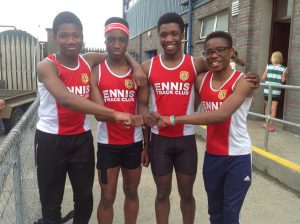 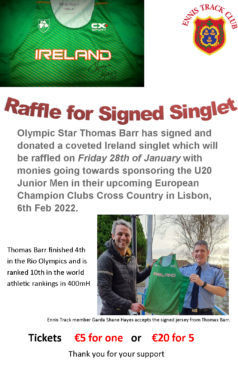