Athletics Ireland and Sportsfile came to Lees Road to watch Ennis Track in action along with Frank Greally who was delighted to meet with Dean Casey who had just the weekend before smashed the record held by him for 51 years before Abdul and Dean beat it within one month.

The following is the media release to this visit –

In Ennis, there is a growing buzz around a certain community driven athletics club. Ennis Track Club has evolved over 30 years promoting athletics to the local community of Ennis, with a lot to celebrate throughout its history.

Gerry Hayes first founded the club on the 19th of April 1991. From humble beginnings, founding club athletes used the late Gerry O’Connell’s field as a training ground. “The field had a drain running through it so to make the laps longer the athletes jumped across it. That’s how they became great Cross Country runners,” Hayes said in a commemorative feature in 2021. 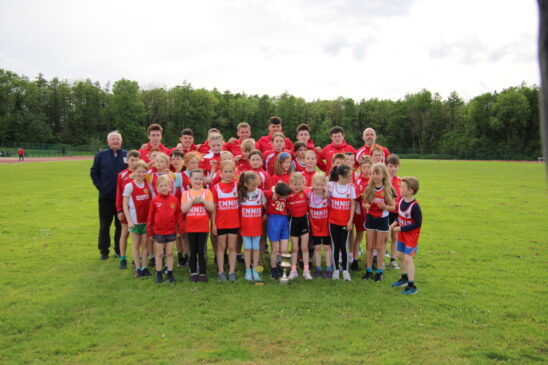 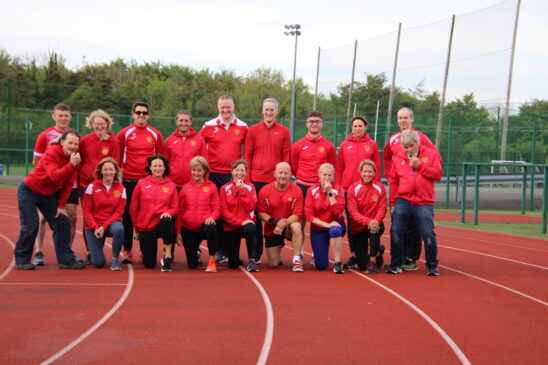 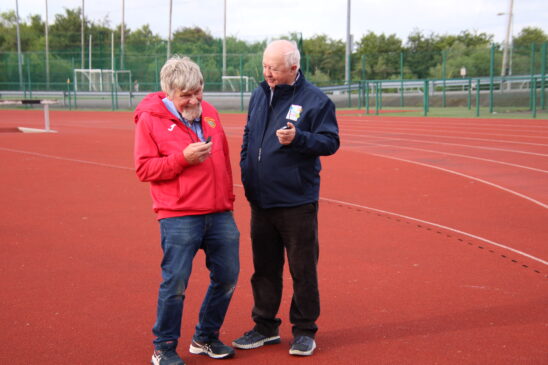 In his latest interview with The Daily Mile Ambassador Frank Greally, Hayes mentioned the gravel track in “the fair green” where athletes would also train, which has become the Tim Smythe Park in Clare. The park now hosts a range of equipment and facilities to allow locals to engage in a multitude of sports with easy access to athletics tracks, pitches, and walking paths.

Still very much active in the club, Hayes coaches’ masters’ athletes as well as supporting the wider team of coaches at Ennis Track Club. Hayes shared the many talents on offer by the coaches of the club, including Pat Hogan who has a strong vision for the club’s development as well as an ability to spot talented athletes like Rory Chesser and the Casey brothers, Dean and Dylan.

As a coach, Pat Hogan is an influential figure within the club, beginning his career over 20 years ago, bringing athletes like Rory Chesser to National Championships while also fostering the future of athletics with athletes such as Dean and Dylan Casey, Mark Hanrahan and many more.

Club member Mark Hanrahan said, “He [Pat Hogan} has been great in our development, it has been interesting to see his development as coach over the years, new ways of training and doing things. For me, after picking up an injury over the winter, he played a huge part of getting me back healthy.”

The dedication to the club and recognition of its support in athlete success, is coming full circle with Rory Chesser set to take up the position as Club Chairperson in the next year.

The Club has recently celebrated the success of its own Dean Casey who broke the 10,000m National U20 Record with 28:57.32 while competing at the night of 10,000m PB’s in the UK. The record had originally been held for 52 years by Frank Greally, before being broken twice in recent weeks, first by a former Irish teammate of Dean Casey, Abdel Laadjel (Donore Harriers), before the Clare man went on to smash the record. 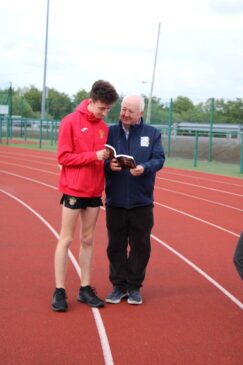 In a conversation with Frank Greally, Casey explained how he got a “very good start” and overcame his fear of “getting dizzy by lap 25” by remaining focused on the job at hand. It appeared to viewers and commentators looking on that Casey was just out for a tempo session.

The young distance athlete explained how in the last 350m he smiled, “when the guy who came second came up behind me, it really became a race again.” Casey finished with a 62 penultimate lap claiming the National U20 record with 28:57.32.

Dean’s Dad, Ger Casey, explained how there was a natural talent within Dean for athletics, overcoming, “the trouble he had getting off the start line, falling or tripping over someone, to then come second or third in the race.”

As a coach as well as a father to Dean, Ger highlighted how in the run up to the record-breaking performance, the environment surrounding Dean was highly focused on allowing him to run well, paying particular gratitude to the facilities within Ennis Track Club, Dean’s Coach Pat Hogan, and the community support of the club.

The Ennis Track Club grounds are nested within the Ennis woods. A looped pathway within the woods provides the perfect conditions for cross country training, with a state-of-the-art track and field facility supplied by the local county council at the centre of the loop. The track is public, allowing athletes to avail of the facilities at any time and the wider Ennis community to engage with the Club, becoming members as well as seeing their local sporting heroes in action. According to Dean having the facility on his doorstep, “makes things so much easier, as a public track it allows us to roll up whenever we want.”

It has been a busy Leaving Cert year for 18-year-old Dean Casey, from representing Ireland as part of the U20 Silver Medal winning European Cross Country Championship team in December last year with Abdel Laadjel, Nick Griggs, Cathal O’Reilly, Sean Kay, and Scott Fagan to competing alongside his club mates to win gold at the ECCC Cross Country Championships in February with twin brother Dylan Casey, Mark Hanrahan Thomas McGuire, Niall Murphy, and Cian O’Boyle. However, he has no intentions of slowing down, with his sights on a busy summer of competition and ambitions of pursuing a health-related degree come September.

His twin brother Dylan Casey, another highly successful runner keeps his brother grounded at home and on the track, with a healthy rivalry between the two, Dylan said in a recent interview “it’s nice to see him [Dean Casey] doing well but it spurs me on to beat him the next day.” 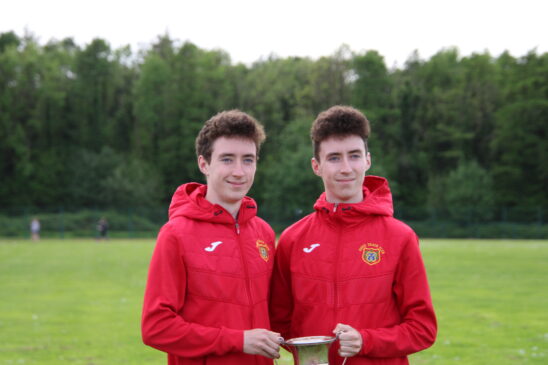 The Casey twins have been part of a tight-knit group of distance runners within Ennis Track Club training together since Under 8’s, almost ten years ago. Coach Pat Hogan has been with the group for the past number of years, fine tuning both each individual athlete’s abilities as well as fostering that strong bond between the group, which is so evident from meeting them.

Club mate Mark Hanrahan, who was a member of the ECCC Cross Country winning team, spoke to Frank Greally, highlighting how he “couldn’t imagine doing what we do day in day out without each other.” 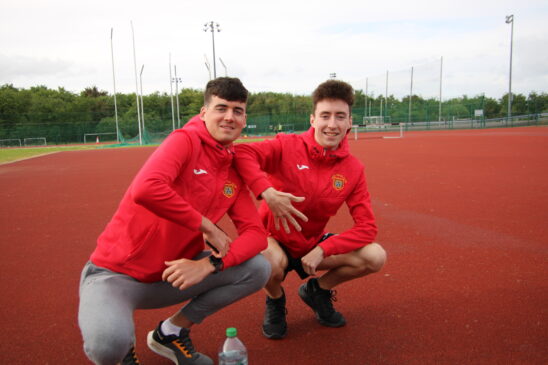 The Twins parents Ger and Maureen Casey alongside cheering both Dean and Dylan on at competition, are heavily involved in the love affair with Ennis Track Club. Ger is one of the invaluable coaches supporting the future of athletics within the club. Ger began “training on a Monday and Friday with the Under 8’s” and since then he has seen more coaches join the club offering events such as Long Jump, Throws and Hurdles.

From humble beginnings this club has expanded into a new facility, broadened its range of events, encouraged new coaches and athletes strive to succeed on the national and international stage. But the spirit of Ennis Track Club is still the same as it was on April 19th, 1991, supporting success and encouraging everyone to get involved in some capacity.