Congratulations to our men’s team who battled all the way and won a well earned 3rd place in the Division  1 National League Final.  They won 6 events over the day.  Thank you David for all the reports and hard work. 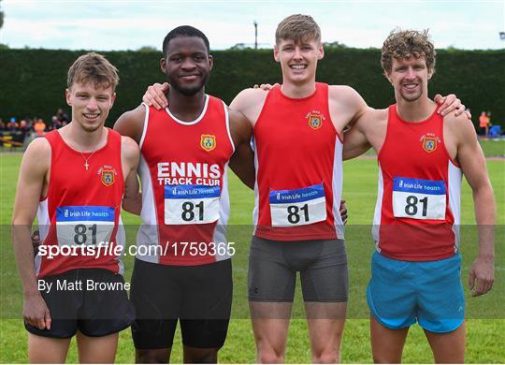 At the end of a full programme of events, the Men’s and Ladies teams gathered on the track in Tullamore Harriers while the days scores were calculated. Athletes from all over Ireland mingled, laughed and chatted having spent the day battling against each other on the track and across the field events and relays. Perhaps it was the first opportunity for athletes to praise each other and be praised, or to reassure and commiserate with each other if events and performances had not quite gone according to plan.

After all the excitement and frenetic activity, there was a calm and and warm atmosphere as athletes and managers waited to see if their team would make the podium. After the Ladies results were announced and after whoops of celebration and photographs taken, it was time for Ennis Track to find out how they had done. When it was announced that we had come third, there was applause from the other teams but our own reaction was muted. The reason was that once the days events had concluded with the 4 X 400m, exhaustion settled on everyone like a heavy blanket. Every one of the teams athletes had given their all, emptied the tank and left it all on the track. There was hardly enough energy left to celebrate let alone savour the moment.

We lined up and received our medals, posed for photographs and then waited as the 1st and 2nd placed teams were announced: Wexford in 1st, Waterford in 2nd. We realized that we were the 1st placed club team in Ireland in Division 1. That made up for the disappointment of not finishing higher up on the podium. It made our achievement more valuable to us , one to savour. The idea of entering a club team in the national league had only grown at a club meeting earlier in the year in January. The initial target was to have a men’s team entered. To see how we would get on. Then that idea grew to having a ladies team too. And so when Round 1 of the league took place in May in Templemore, Ennis Track was represented by two senior teams for the first time in the clubs history, a men’s and ladies team. It was also historic as we were the first Clare club to enter teams. The men’s team did so well that confidence grew to the point where people started to say we could not only make the final but could achieve a podium finish. Maybe even win.

After Round 2 in Athlone we felt that we had done enough to get both teams into the final but unfortunately that was not to be. The ladies team missed by 2 points. Leaving the men’s team to head for the final with hope and determination certainly, but with concerns over injuries to athletes and unavailability of others. Athletics is a solitary lonely sport at times. Competing as an individual despite training with fellow athletes, demands an almost selfish dedication to the aim of reaching excellence. Which is why the National League is so wonderful. It allows that selfish dedication, that search for the perfect run, sprint, jump or throw, but with the support, company and camaraderie of your team. And you can’t have a better team than your own club, your own townies, your own schoolmates.

So when athletes had injuries before the final, we adapted and chose others to take their place. When athletes had family or other commitments, we did the same. During the day of the final, the atmosphere built slowly. We watched nervously as other teams athletes won their events while we struggled. Martin Curley started the day in the 110m hurdles, followed by David Courtney in the Pole vault, both placing 4th and getting points to get us up and running. Cathal O’Brien jumped excellently in the long jump placing 4th. But then the tide started to turn. In the middle of the day our excellent 4 X 100m relay team, Cathal O’Brien, Tony Odobote, Shawn Benson and Gabriel Kehinde, exploded into action and put on a display and took first place in a new club and county record. They deserved to strut. They were brilliant.

Then it was the turn of the middle distance men, showing everyone why Ennis Track Club is called Ennis Track club. A confidence and swagger that was magnificent to behold. Rory Chesser the Team Captain in the 3000m Steeplechase,  Darragh Lynch in the 1500m, Damian Landers in the 800m and Cathal Crosbie in the 400m. Crushing it. Smashing it, on The National stage for all to see. We were enjoying it and to be honest so was everyone else. Watching an historic team from a small club performing excellently at top level: it felt like they were welcoming us.

The day finished with the 4 X 400m relay team, Jemil Saidi, Damian Landers, Darragh Lynch and Cathal Crosbie, putting in another barnstorming performance to come in 1st. And sandwiched in between these wins were the great performances of the athletes that placed in 2nd, 3rd, 4th and lesser positions during the day. Every one of those performance adding points to the team tally that earned us the Senior Bronze medal. Cathal O’Brien had a busy day, placing 4th in the long and triple jump as well as being in the magnificent 4 X 100m relay. Jemil Saidi ran a brave and brilliant 3rd place in the grueling 400m hurdles as well as being in the 4 X 400m relay at the end of the day.

Daniel Greene, guesting from St Mary’s AC, jumped excellently in a very high standard competition. Eamonn Cleary, guesting from Shannon AC, powered to 2nd in both the shot and discus. Gabriel Kehinde also placed 2nd in the 100m, pulling up agonisingly with a hamstring injury that robbed him of 1st place. Kevin Chesser bravely added his contribution in the 5000m in a high class field. And in a corner of the stadium, Phil Kearney, with an injured knee, competed in an event he had never done before: the 56lbs for distance. And won. How about that !!!

We gathered before the results were announced. A last opportunity to take a photograph with no one missing. Last words, to say something before we went our separate ways. No matter what the result, we’ll done. This is history; savour it. You are inspiring the clubs juvenile athletes and they will follow you. Thank you.

And when it was done and we celebrated, medals around our necks, it was the reactions of our Club President Gerry Hayes, our Ladies Team Captain Maria Carey and our Club Secretary David Lyons, who had travelled to support us, that put our achievement in perspective. They were beaming ear to ear. Gerry was seeing the fruition of dreams he had decades ago of moments like this. Seeing his club mix it with the best. Reassured us and dismissed any suggestion that we could have done more. Laughed at our disappointment that we hadn’t come 2nd or won the title.

We’ve done well. Very well. We were a team and a damn good one. We celebrated together and before we start planning on how to improve next year, we enjoyed the moment. A rare and wonderful piece of shared history. Well done.