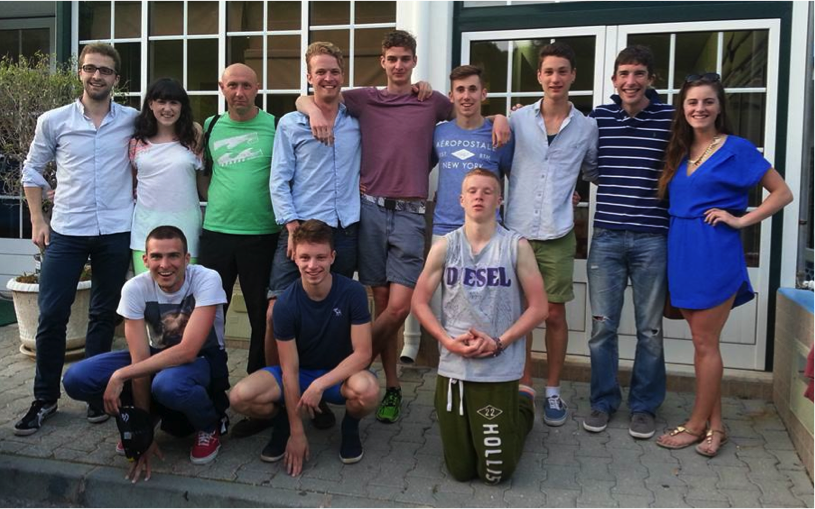 …all of me/loves all of you

So rang out the words of R&B heartthrob John Legend – over and over AND over again – during the course of the third installment of our annual Easter warm weather training camp in Albufeira, Portugal. His haunting melody reverberated around our ’ghost’ hotel from the tinny speakers of smartphones and laptops, and became one of several anthems being played ad nauseam over the 9-day period.[spacer style=”1″] 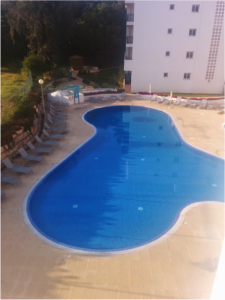 From Monday 14th to Wednesday 23rd April it was once again time to break free from the realities of daily life and delve into the life of the professional athlete – except without the endorsements and far more jars of Nutella. With Easter falling mid-April this year, it meant the training camp took place almost 3 weeks later than last year and so we enjoyed sunnier weather this time around. Another welcome aspect of the trip was the virtually empty hotel in which we found ourselves. Acquiring poolside territory has been an ongoing contest in previous years. This year, however, it appeared the Vikings had forfeited. Despite the lack of Nordic eye-candy usually enjoyed down at the swimming pool, we felt like millionaire rappers living it up in our cavernous marble-floored crib.[spacer]

The sleepy hamlet of Praia de Falésia has been our chosen location for these camps. In many respects it cannot be beaten as the perfect running location – excluding our beloved Lee’s Road, of course. We have two running tracks of varying quality to choose from, one of which is right next to the hotel. Immediately on the other side of the hotel is a park where the 2010 European Cross Country Championships were held. Its not exactly what we would define as cross-country in Ireland, nevertheless the grassy 2 km loop is a welcome break from the dusty trails of the Algarvian desert-like terrain. With the beach a mere 400 meters away, it provides the perfect setting for easy evening jogs, cooling off tired legs in a surprisingly warm Atlantic Ocean, and above all, a bit of sand-based craic.[spacer] 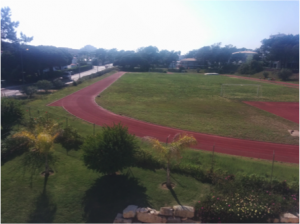 As endurance athletes, several of us conform to the classic coffee addict/sweet tooth stereotype. In the café dubbed ‘PJ’s Place’ we were adequately provided with both vices. Our almost daily indulgence of Café con Leite (milky coffee), Tarta de Amendoa (almond tart), and dos bolas gelado (two scoops of ice-cream) were served up by the cheery proprietor with a smile and a misplaced ‘Oíche Mhaith”, no matter what time of day it was. I like to think we brightened his mornings, afternoons and evenings with our witty backchat. We love PJ and he loves us. Respect, man.[spacer]

Training was intense. Twice a day, AM and PM runs. Stretching sessions. Core sessions. Music video-making sessions… more to be revealed about that soon! However, what defines us when training as a group is our collective will for self-improvement. For this reason, the seemingly copious amount of cardiovascular activity feels natural. We feed off the intensity to the point that rest days feel long and are spent anticipating the next, ever-looming workout. No matter how short these training trips are, I am always amazed how quickly people adapt to the lifestyle: communal eating, shared bedrooms and bathrooms, the daily grind of hard training. The question arises, “why don’t I live like this all the time?”[spacer] 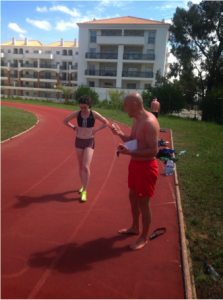 The 12 athletes present all had individual reasons and goals for being there, from chasing international qualifying times, to maintaining fitness during injury, to simply getting fit and healthy. Yet we were all on common ground and everybody helped each other along. For me it was encouraging to see by how much people had improved and developed since I had seen them last. Being unable to run for the full week because of a foot injury, I was in the enviable position of being on the other side of stopwatch and seeing the grimacing pain on people’s faces during a track session. While I donned my Sports Science Hat and shot some video analysis (well, to be fair, music video) footage of the guys running, I witnessed how Pat took control of four separate sessions simultaneously: 1200m reps, 400m reps, 300-500-200-400 m reps, 800 m time trial…An exercise in multi-tasking in the extreme! I saw how the younger guys hung onto the coattails of the older ones during repetitions and relishing in it. When it comes to the non-trivial task of getting around the oval in a specified time, peoples’ focus switches. It’s game-time. Nothing was spared by anyone on the track that day, and it was inspiring to see.[spacer]

Everything we do as athletes involves a type of intensity that regular folk can’t match. Off the track the competition continued: a race to the showers, a pool diving exhibition, ordering two main courses for dinner. It is with this intensity that allows runners to excel not only in their sport, but also in their daily lives. As Lynchy brilliantly illustrated, even the sexy Russian ladies couldn’t offer enough distraction during one particular session on the cross-country course: “we’ll look at them later, boys; let’s get up this f***ing hill first.”[spacer] 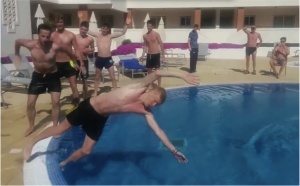 Other off-track developments were abound. Camden-worthy hairstyles appeared with the help of our in-house hair stylist. A few new tattoos had emerged, one of genuine ink, two of the “yay, I’m on holidays” kind. As for synchronized water acrobatics, the Russian Olympic team better watch out because we’re the next big things.

Along with the goatskin-clad farmer we encounter on the ‘Vilamoura trail’, trips to the Pinhal Restaurant for dinner have become a sort of an institution. About twice in the week we join the Brady Family from Dublin for some local cuisine of fish, steak with fried eggs, and ‘garlicky carrot things’. Their four kids are on always point, offering up the evening’s entertainment with endless games of hangman on the paper tablecloth and pony-related anecdotes. It’s always good fun and a welcome distraction from the aching feeling from our tired, sunburnt, dehydrated bodies. The Brady Bunch, we salute you![spacer]

Pat Hogan never fails to bring an added depth to proceedings. It was decided that every evening after dinner each one of us would recite a rousing speech from a famous movie or sports personality. It was great to see everyone bringing their personalities across during these performances: Murphy with his fellow Clarecastle man’s 1995 All-Ireland winning speech; Seán with his almost Oscar-worthy acting skills; Rory with his impressively lengthy rendition of Al Pacino’s Any Given Sunday dressing room speech. All were inspirational in their own way, but above all, very entertaining!

Amazingly John Legend’s song is being played from the radio as I write. (More amazingly is that it’s a radio-hit sensation even in Germany!). To put it mildly, I now hate this song (thanks Seán). Nevertheless, I can’t help but think back with fond memories of Portugal when I hear it. Maybe Legend is right about one thing:

…Even when I lose I’m winning

While reminiscing with Pat one night, I was reminded of how far this club has come over the last 23 years. Victories and PBs are the tangible results, but the journey towards them is what makes it all worthwhile. Over the years racing seasons can blur into the next, and so stopping to take stock of what you have achieved, and most importantly to enjoy this journey.

And so, Wednesday morning heralded the end of yet another fun-filled, lung-bursting training trip. With one final café con leite, we went our separate ways: London, Munich, Dublin, Cork, Clare. Home is where the heart is and, for us, Ennis Track will always be home.[spacer]

I can speak for all of us in giving a big word of thanks to Pat for providing these excellent trips away, which incidentally are averaging at three per year at the moment. His words of encouragement and wisdom are things I have taken with me everywhere I go. Again I’m sure my thoughts are echoed in the group.
Once again our gratitude goes to Mr. Gerry Hayes, the instigator of this great big family we call Ennis Track. Without Gerry, I don’t know where some of us would have ended up.