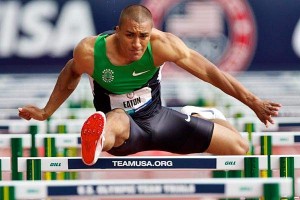 Ashton Eaton, the Olympic decathlon champion and world record holder, is the headliner at the AIT International Arena Grand Prix on 26 February.

The 26-year-old, who was dubbed “the best athlete to ever walk the planet, hands down” at London 2012, is part of an international field – including Eaton’s wife Brianne Theisen-Eaton – that will compete in the AIT International Arena, Athlone.

One of the highlights of the evening will undoubtedly be the Senator Eamonn Coghlan Mile, which is sure to attract a top-calibre field looking to run the first four-minute mile in the Athlone venue. A prize fund of €500 is on offer for the winner of the race if he achieves the elusive sub-four minute time.

Amongst those already signed up to compete in the race are John Coghlan, David McCarthy, John Travers, and Joe Warne.

The grand prix is attracting a growing list of national and international talent. People are really excited about the opportunity to see athletes who have succeeded at the highest level, whether that be in the Olympics, the World Championships or the European Championships. We’re really confident that this will be a sell-out event

The AIT International Arena has established a reputation as a fast track, something which Prof. Ó Catháin says is proving to be “a decisive factor in attracting the sporting elite” to the midlands venue. “In the year since we opened the International Arena, new records are continuously being set, including most recently a new world record for over-60 in the 800m set by Joe Gough, as well as Mark English’s new national senior and u-23 indoor record in the 800m. Just last Friday, 12 indoor athletics intervarsity records were broken. That bodes well for some really keen times at the Grand Prix,” the president said.

Amongst the international athletes competing at the AIT Grand Prix will be:

Further information about the AIT International Arena Grand Prix can be found at www.aitsport.ie. The event starts at 7pm on Wednesday 26 February. Tickets are priced at €10 for adults and €5 for children, and will be on sale on the door. Highlights of the event will be shown on Setanta Ireland.