The weekend started off in typical fashion: meet at McDonalds on a damp Friday afternoon. Delicious food, gear bags, foam rollers and other running paraphernalia were packed onto the bus and the race for the back began. We sat in the bus waiting to set off but later learned it had broken down, another bus arrived without delay and the whole process was repeated. The trip down was lively. Pat always tells us these training camps are important for group bonding and I think bus journeys often do just that! This particular journey is a long one and we were trying to do anything we could to stave off the boredom, read, sleep, listen to music whether it be an “interesting” rendition of John Legend’s “All of me” on the bagpipes or the cringe-worthy “stop, don’t talk to me!” by the wonderful Tre Coast. But finally we arrived at our destination in northern Kerry. We were split up into who would be staying with who, I spent the weekend with Rory Chesser, Paddy Quinn, Colin McNelis and Karl Fitzmaurice. 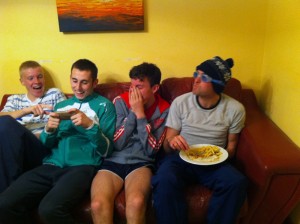 We were all called to Pat’s house, which became the centre for all meals and meetings, that evening to be told what the weekend was about, the training we would be doing and for dinner. Dinner comprised of wonderful food sent by the wonderful mammies at running, all types of food to suit all tastes were sent and was enjoyed thoroughly by all throughout the weekend! After dinner we all took an early night to prepare for what surely was going to be a tough session on the beach the following morning.

We were right. We were summoned to Pat’s that morning and briefed on the session to come, hard intervals was the session of the day! A short jog down to the beach revealed there was a savage wind, not ideal for running but was the perfect weather to build toughness! Pat often reminds us “You gotta be tough boy!” We all worked hard that day and took a well deserved dip in the refreshing Atlantic, the more hardy going full on and jumping straight in! A short jog back to base and after a quick nutella sandwich we strolled up to the pool to relax in the swimming pool, the Jacuzzi, the steam room and the sauna, looking back now we spent the majority of our time in one of the four!

The Saturday night entertainment was originally planned to be a movie by the name of “Remember the Titans” but after technical difficulties that was changed to a group game of charades, with Mia and Lynchy coming into their own. Excellent miming earned the girls their way to a resounding victory over the lads. I hope charades becomes an Ennis Track training camp tradition in the future!
The final day was spent running on the road, relaxing in the pool, pushing it hard in circuits and flexibility routines and most importantly the clean up operation, each house was left in impeccable condition!

Finally I would like to thank everyone involved in the planning of the weekend, to everyone who made the wonderful food we enjoyed all weekend, to Ita and Marie who played a pivotal role in the organisation of the weekend and last but certainly not least Coach Pat Hogan for making it all possible. None of us would be where we are without you and on behalf of all of the “Pathletes” I would like to thank you! 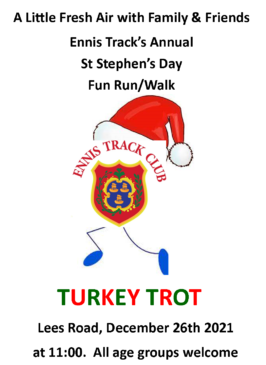