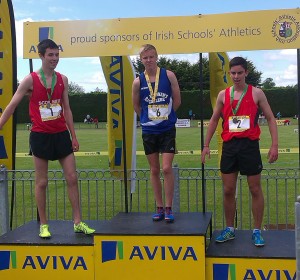 Kevin Mulcaire, St Flannan’s College running the 3000m intermediate boys smashed a 36-year-old Irish Schools record with a superb performance. His winning time of 8:33.92 was 2 seconds inside the record which was set in 1978. Meanwhile, Eoin Hanahran was competing in the discus in the senior boys on the outside arena. Here Eoin grabbed a bronze medal with his 4th throw of 36:20 m. Tony Odobote, only an hour after winning a bronze medal in the 100m was now racing most of the same competition in the junior boys 200 m. Tony had a better start, and looked a winner all the way, but the gold medal was snatched from him right on the line, Tony winning the silver in 23:36.
[spacer style=”1″]
Jamie Roche, St Flannan’s College , was racing in the under 16 boys mile. Jamie was in 2nd position right up to the bell lap, but on the home straight he lost a few places finishing 7th , a solid performance. Donal Devane , St Flannan’s College was next on the track for the middle distance, running the junior boys 1500m, he stuck gamely to the group finishing 10th overall. Kevin Mulcaire was back on the track  90 min after his record-breaking performance in the 3k, this time running the 1500 m intermediate boys. Kevin was 3rd in the last 100m but made a great surge on the inside to snatch the gold medal.

[spacer style=”1″]
All the coaches at Ennis Track Club would like to thank all the athletes who competed at the schools, right throughout all the competitions and wish the students taking exams the very best of luck .